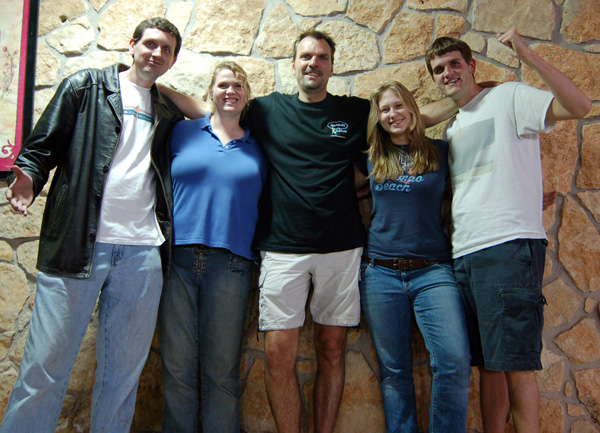 I’ve been chasing in the States several times. And each time I’ve had the pleasure to chase with four colourful, amusing and pleasant Americans, that are the Florida based chaseteam Warmsector.

Warmsector consists of four American chasers from Gainsville in Northern Florida. The three siblings Paul, Sarah and Marc, and Sharon, who is married to Marc.

The past six years the quartet has chased all over the States in their pursuit of tornadoes. In the beginning they kept their distance and filmed and watch the storms from a safe distance. But over the years they have moved closer and closer to the supercells to get a glimpse of rotation and shearmarkers. I’ve had the privilege to follow them in under the storms, in to the core, where the danger is big, but the reward and the experience even bigger.

The reason that Warmsector has been able to keep the group together for so many years, is largely due to the fact that they have been good at delegating the responsibilities.

On my trip in may 2007 in my capacity of chariman of The Danish Severe Weather Society, I presented the members of Warmcetor.com with our caps. Watch them receiving the presents.

Below I’ve tried to make a brief description of them, as well as their role in the group.

Paul is the absent-minded professorlike type, who has an incredible knowlegde about especially convective weather. He is the one, you listen to, when a target area is to be found. He’s brilliant at reading the charts and pressing the very last bit of information out of them. And he is not affraid of sharing this knowledge and consulting other people, including me, even though I’m by far not as experienced as him.
Paul loves ”Bananadream” and coffee.

Sarah is the happy and always smiling person, who makes sure that the rest of the group is fine. She also has a huge knowledge about convective weather. Her role in the group is to film and catalog all the captured material, which she carries out very carefully. This year she made sure that I got something to eat, when the chase was at its height. Sarah is a very dear friend.

Marc is the neardy and a little bit crazy chaser with an email-address that begins with creepyboy! He will soon graduate as meteorologist and naturally knows a lot about the weather in general and covective. Marc is also good at reading the charts and work out covective forecasts. Like the rest of the group he also has devoted his life to chasing. He’s a good friend and a stunning photographer.

Sharon is Marc’s wife. She joined the group a little later and has said that is wasn’t easy to be accepted by the others. But today she has found her place in the group, that is first and foremost as navigator. This has from time to time given rise to the very famous u-turns, that characterize the chaseteam! Sharon is a nice girl with a cute face and a sweet smile. But looks can be deceiving, and make no mistake. She is very much capable of cutting things short and making though decision. Something that from time to time is necessary, when there is disagreement in the quartet. Sharon is both pleasant and funny to be around.

The three siblings all sing in a choir. And they were so kind to give me a sample of their skills. Something I really appreciated. Play the video to hear them sing.

Warmsector has become my very close American friends, whom I keep in touch with. And I’m sure we haven’t chased together for the last time.

I just want to thank all of you for everything you have done for me! And I look forward to seeing you again soon.

If you want to know more about Warmsector, go to their web page by clicking here.

Want to join the discussion?
Feel free to contribute!

This site uses Akismet to reduce spam. Learn how your comment data is processed.

We may request cookies to be set on your device. We use cookies to let us know when you visit our websites, how you interact with us, to enrich your user experience, and to customize your relationship with our website.

Click on the different category headings to find out more. You can also change some of your preferences. Note that blocking some types of cookies may impact your experience on our websites and the services we are able to offer.

These cookies are strictly necessary to provide you with services available through our website and to use some of its features.

Because these cookies are strictly necessary to deliver the website, refusing them will have impact how our site functions. You always can block or delete cookies by changing your browser settings and force blocking all cookies on this website. But this will always prompt you to accept/refuse cookies when revisiting our site.

We fully respect if you want to refuse cookies but to avoid asking you again and again kindly allow us to store a cookie for that. You are free to opt out any time or opt in for other cookies to get a better experience. If you refuse cookies we will remove all set cookies in our domain.

We provide you with a list of stored cookies on your computer in our domain so you can check what we stored. Due to security reasons we are not able to show or modify cookies from other domains. You can check these in your browser security settings.

We also use different external services like Google Webfonts, Google Maps, and external Video providers. Since these providers may collect personal data like your IP address we allow you to block them here. Please be aware that this might heavily reduce the functionality and appearance of our site. Changes will take effect once you reload the page.